Why Your Aces ALWAYS Get Cracked!

As serious poker players, we here at ProfRB – and our readers – are masters at evaluating evidence, impartially recalling past events, and making objective decisions without being influenced by faulty logic or emotional thinking. Just kidding.

The truth is that we, along with almost everyone else, are susceptible to lapses of judgment, inaccurate memories, and letting our feelings affect our decision-making at the poker tables. We can only hope that we employ our knowledge of our own weaknesses to help us make fewer mistakes than our opponents. This is, after all, where the profit comes from in poker.

One of the most pernicious psychological tendencies, at and away from the tables, is negativity bias. This phenomenon, also referred to as “positive-negative asymmetry,” refers to a tendency for one’s mental and psychological state to be more affected by negative occurrences than positive ones. 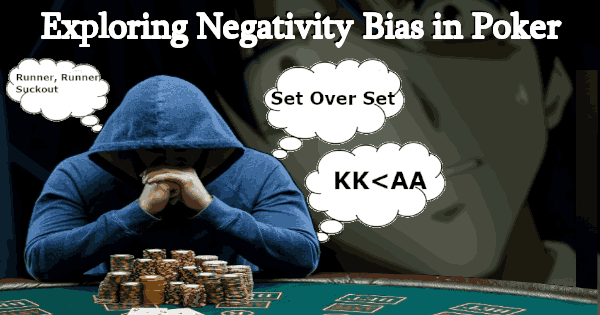 Negativity bias causes us to consider the magnitude of a bad event to be greater than that of a good event. This is the case even when the values of these happenings can be objectively measured as being about equal. For example, most people experience feelings of greater intensity after losing $100 than after gaining $100 despite the absolute value of both sums of money being identical.

This effect extends beyond just the emotions of a moment and is in fact reflected in our long-term memories. Simply put, we can recall negative items from the past much more readily than we can positive ones. More than this, when asked to estimate the frequency of events that have occurred, test subjects consistently overreported the number of bad occurrences compared to good ones.

A curious phenomenon related to negativity bias is that positive outcomes tend to be viewed as just a part of the normal course of the world whereas unwanted results are often attributed to an external agency. That is, people who experience losses during a gaming session are more likely to believe that someone or something played a hidden role in making them lose.

This deeply ingrained desire to blame someone for disasters was perhaps significantly responsible for the early persecution of Christians in the Roman Empire, the various witch hunts and inquisitions of the medieval and early renaissance eras, and the many seemingly farfetched casus belli that have been cited as justification for wars throughout the ages. In a less dramatic fashion, it has also been the progenitor of several unlikely theories to explain away losses in poker.

How Does Negativity Bias Intersect With Poker?

It almost goes without saying that poker enthusiasts remember big pots that they lose more readily than massive scores that they make. They also generally believe that they have suffered more than their fair share of suckouts and coolers.

But everybody cannot simultaneously be on the wrong end of variance; this would be mathematically impossible. Negativity bias is usually the correct explanation for this inaccuracy in the minds of players.

Even Pros Are Susceptible

Even experienced, professional players sometimes fall victim to this way of thinking. Watch this rant from Canadian poker superstar Daniel Negreanu wherein he laments his terrible luck in his grudge match against rival Doug Polk:

At that point, Daniel and Doug had booked fewer than 10,000 hands in their challenge: a statistically meaningless sample size for the purposes of evaluating running good or bad. Yet, this small blip in his results caused Daniel to spew forth a profanity-laden tirade. We were quite disconcerted to see this coming from someone of Daniel’s caliber. Indeed, we could not help but chuckle when we saw the following exchange of comments on YouTube:

If someone of Daniel Negreanu’s undoubted skill and achievement can, in a moment of irritation, curse his misfortune so volubly, then we can easily imagine what such a downswing could do to the mental state of a less savvy individual. Indeed, we can do more than imagine because many of the most outraged (though assuredly not the most intelligent) players have left a record of their thought processes in a thread on Twoplustwo devoted to rigged theories.

These ill-conceived accusations often involve allegations that the random number generator is rigged, that there are colluders or superusers at the tables, or that bots are infesting the games. Thus, we observe the tendency for humans to blame undesirable outcomes on the operation of malevolent external agents rather than just random luck.

Something that almost all of these theories have in common is that they’re based just on feelings or half-remembered sequences of hands and NOT on documented statistical evidence. The minds of the people forwarding these unlikely claims are thus fertile breeding grounds for the operation of negativity bias, which – like all biases – depends upon a lack of rigorous, logical thinking for its proliferation.

Here’s an example of a rigged poker theory for your entertainment and edification:

Here at ProfessionalRakeback, readers have been known to record such implausible conjectures in the comments section of poker site reviews. We’ve even had people email us their speculations about specific rooms using bogus RNG technology. Needless to say, we argue against these positions forcefully (unless we’re just too tired to get involved with this kind of BS on that particular day, in which case, we just ignore them).

Apart from causing certain players to concoct elaborate and false conspiracy theories, negativity bias can lead to improper tactics and strategies at the tables. Someone who feels that pocket kings always run into aces might not play them as aggressively as he should and thereby lose value. Similarly, an individual who has seen her bluffs picked off several times during a session may feel that her bets with air are doomed to failure and then begin bluffing way less often than is proper.

On a wider level, some people may associate certain online poker sites or tournaments with bad results simply because they happened to have a short string of losses while playing them. They might then place undue weight on this scanty amount of evidence and avoid profitable situations at those rooms and in those games.

Lest you get the mistaken idea that cognitive biases are confined in gaming to the poker tables, they’re actually pretty common in other forms of betting too. For instance, the phenomenon of “chasing” losses is prevalent in both horse race bettors and slot machine players as a result of other mental biases.

Why Does Negativity Bias Exist?

Given the array of problems that this psychological oddity can create, you might be wondering why we are prone to negativity bias in the first place. The answer to this question lies in the evolutionary history of our species.

You see, in the past, there was a great incentive for remembering and thinking about terrible happenings that you had observed before. Hearing a funny noise and recognizing that it sounded like that saber-toothed tiger you saw a year ago could have had a big impact on your survival. Similarly, identifying a new patch of berries as being eerily similar to the ones that made your entire tribe ill some months past would have spared you and your buddies from considerable discomfort and maybe death.

While deriving these undoubted benefits from being able to recognize patterns in the world, our prehistoric forebears also certainly were spooked from time to time by shadows, the sound of the wind blowing, and other innocuous circumstances. However, the penalty for reaching an unwarranted negative conclusion was pretty small: wasting five minutes fleeing a non-threatening creature or having to skip a meal and look for other food.

Given the balance of costs and benefits involved, it makes sense that genes that coded for a tendency to dwell on the negative were spread to succeeding generations via natural selection. Meanwhile, those optimists who thought that it was a good idea to investigate that scary-sounding growl or drink from that pool of water surrounded by animal skulls were quickly weeded out of the gene pool.

Today, of course, we don’t really face a lot of existential threats to our survival – at least not in the developed world. So we don’t gain much advantage from a bias toward thinking overmuch about negative events. Still, we are affected by the undesirable consequences of such misguided reasoning.

In this aspect, negativity bias is similar to a fondness for sweet foods or a willingness to follow leaders who are self-confident to the point of narcissism. It’s a trait that was once very valuable to homo sapiens but has now outlived its usefulness. Sadly, the mere recognition that an idea or attribute is outmoded does not magically make it disappear; we’re stuck with negativity bias for the moment.

Fortunately, just as with other defects in observation and comprehension, we can make adjustments to counteract this bias once we are aware of it. By passing our initial ideas and feelings through a filter of impartial logic, we can discard many of our mistaken trains of thought. Nobody is perfect in this regard, but we can make definite progress over time. After all, when was the last time you witnessed a human sacrifice or consulted a sorcerer to dispel the bad mojo that a neighbor had cursed you with?

If you haven’t yet signed up for online poker accounts, then don’t let a fear of bad results prevent you from doing so. Internet cardrooms have low minimum deposit requirements, often as little as $20 or $50, so you won’t have to put much at risk if you don’t want to.

There’s no chance of legal prosecution either if you live in the United States, Australia, Canada, and most of the rest of the world. The federal statutes that penalize offshore gaming in these three countries apply only to those who own and operate the sites. They do not target the individual player in the slightest degree.

Read this article containing a list of the best USA online poker sites if you reside in one of the 50 states or a U.S. territory. If you’re a resident of Australia, then head over to an overview of the leading Aussie-friendly internet poker destinations. Our Canadian readers can instead click through to a Canadian offshore poker informational page.