If you check on some poker forums or Reddit, you’ll find hundreds of threads discussing the subject of online poker being rigged, usually with one very angry individual who’s certain that online poker is, at its very core, rigged. What other explanation could there be for his series of bad beats?

Discussions usually have some sort of evidence, and if you’re don’t have very much knowledge about the game of poker or about mathematics, chances are that some of this evidence will seem factual and will raise an eyebrow.

At the center of all complaints about online poker being rigged is an overestimation of one’s own chances to win a hand, or, more precisely, that a certain hand must win. After that, everything else is a conspiracy theory that attempts to explain why that player lost. In short, people complain that online poker is rigged because they had a few bad beats and are angry. There was never any solid evidence that online poker is rigged, and even if something came up, it would be specific to a single poker site that’s doing something shady. 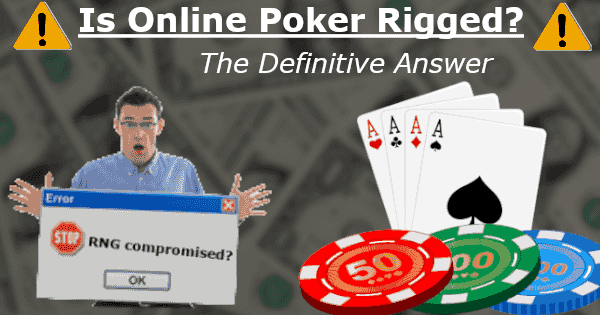 We’ll discuss this in detail. But first, let’s give you a list of quality poker sites where only your ability as a poker player, and luck, will determine the outcome of your hand.

USA Poker sites that are definitely NOT rigged

If you’re simply cautious about playing poker online and want to make sure you’re playing at a poker site that is not rigged, here are 10 sites we recommend. Pick one that suits your specific needs.

If any of these operators would do anything to make us doubt their RNG or their business practices in general, they would no longer appear on the list. Meaning, if you see an operator on the list now, you can be certain the poker site is fair.

Theories why online poker may be rigged

In an attempt to justify their belief that online poker is rigged because they had a bad beat, people usually end up with one of these arguments:

Why would poker sites rig their games?

Poker sites would only have an incentive to somehow rig cash games, as there’s nothing to be gained by rigging tournament play as tournaments have buy-ins, and the poker site couldn’t care less who wins.

Poker sites are in the business of raking hands, and to keep that business going, all they have to do is keep the game fair. In fact, that’s the one thing that’s expected of them and the number one reason why they even exist. That is why no poker site has yet tried to rig the RNG and risk their business by doing so. It would just make no sense.

Besides, wouldn’t a poker site benefit the most if it prevented people from entering a series of bad beats that leads to them complaining about poker being rigged?

Even if we’d assume that some poker site would want to rig the RNG to achieve the above, it would take a serious machine learning algorithm, AI almost, to successfully rig the game to benefit the operator.

The hand histories are constantly data-mined by the players and thoroughly analyzed, and any deviation from the norm would quickly be noticed. So if any poker site would manage to achieve this, it would be quickly noticed and there would be real proof about that poker site being rigged.

Instead, any charges against poker sites are coming from players who display a lack of understanding of the game of poker and the mathematics behind it.

Understand what the numbers mean

Even the strongest possible starting hand in poker, AA, has an 85% chance to win the pot (against one opponent’s random two cards). AK, another strong starting hand, has a chance of just slightly over two in three, 68%, to win the pot. One of weaker starting hands, 22, still has a 51% chance.

Those numbers mean exactly what they mean. 85% is 85%, not “almost a sure thing” as so many players wrongly assume. AA is not an automatic winner of all pots – only roughly 85% of them.

The math behind the game of poker is much more complex than pure percentages. For example, it’s perfectly possible to lose many hands with pocket Aces in a row, or/and to have a winrate of only 60% with them over an incredibly small sample size such as 100 hands – which is what most angry players who scream that poker is rigged are basing their assumption on.

In our editorial Online Poker Rigged? A Thorough, Informed Discussion, we explain how even a sample of 200,000 hands wouldn’t be enough to make conclusions about the Random Number Generator (RNG) that’s used to deal the cards. With a winrate of 2 bb/100 and a standard deviation of 90bb/100, there was a really wide range of possible outcomes, and even with these parameters, the probability of a loss after 200,000 hands was 16%.

If even 200,000 hands with a solid winrate doesn’t guarantee a profit in the long run, then it’s obvious why a player who’s (too) confident about winning would be deterred by a string of bad beats in a small sample size.

Shady poker sites do exist, but rigged RNGs do not (anymore)

We have been playing poker for decades, and as explained in our editorial Online Poker Rigged? Part 2, there has been all kinds of shady behavior at poker sites, including:

Not once in our careers have we encountered a faulty or rigged RNG, and only heard of it once – Planet Poker, the first poker site in existence. All other sites that came after it, to the best of our knowledge as poker professionals, had and have fair RNGs.

You might want to check the blacklist of poker sites and make sure you’re not playing at any of them.

Almost everyone tightens up in a real, live tournament, but online, there is a larger percentage of people who play loose, sometimes very loose, almost care-free, pushing their luck to the maximum. This is particularly true in micro-stakes games. Combine this with a much larger number of hands per hour, and it’s obvious why there are more bad beats online than there are in live tournaments.

Online, a loose player likely won’t be criticized for his bad play, or it won’t hurt much; it will just be a message by a total stranger in the chat box that’s quickly forgotten as you switch to another table. Live, the situation is different, and no one wants to be laughed at in person.

This means that online players tend to be willing to take a risk with lower winning odds more often than live players do, so the chance of losing to a weak starting hand with pocket Aces increases. A live player won’t push his 22 to the limit. An online player who’s playing poker for the first time just might.

And this is why. Pros understand the mathematical implications of variance, constantly guard against biases in their own mental processes, have sufficiently sized bankrolls that the odd bad beat here and there doesn’t send them into a rage, and have seen enough hands over the course of their careers that they are unfazed by the downswings and upswings that are an inherent part of poker.

We’ve encountered plenty of people who swear that internet poker must be rigged. We disagree entirely, and we have compiled a series of questions and answers below to attempt to dispel these kinds of myths about the game.