While most people in the United States were focused on the exit of Donald Trump and the inauguration of new President Joe Biden, a few others took notice of something else. Essentially, the federal government’s attempts to redefine the Wire Act would be exiting along with the former president.

Why? Because the U.S. First Circuit Court of Appeals issued an opinion on the ongoing legal battle between the Department of Justice and New Hampshire on the morning of Wednesday, Jan. 20, 2021. The decision saw judges side with the New Hampshire Lottery Commission over its challenge of the 2018 Department of Justice (DoJ) opinion on the Wire Act. This new ruling means that the Wire Act targets only sports betting, leaving online poker and other forms of betting outside its remit. 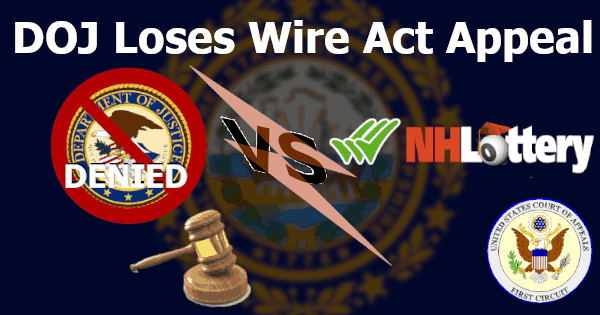 The Story So Far…

For anyone who hasn’t been keeping up with the affairs of the United States, allow us to provide a bit of insight into what has just occurred. The Interstate Wire Act of 1961, which also goes by the name of the Federal Wire Act, has prohibited certain types of betting businesses from being active in the USA. It came into operation back in 1961.

In 2011, the DoJ released its formal legal opinion on the language utilized in this act and on the scope of betting that it covers. In that legal opinion, it was stated that any interstate transmissions of wire communications not relating to sports betting are out of its reach.

This left all other types of online gambling in the clear to operate. However, in November of 2018, the legal opinion on that act was reversed by the same DoJ. It was at this time that the decision was made that the act actually covers all forms of wagering that cross state lines. This would include online poker gameplay.

Once the new opinion on the Wire Act was announced, the DoJ also stated that it would delay the enforcement of that opinion. This was done so as to provide any businesses that relied on the 2011 opinion the “time to bring their operations into compliance with federal law.”

However, on Feb. 15, 2019, the New Hampshire Lottery Commission proceeded forward with filing a complaint in the U.S. District Court for New Hampshire.

In that complaint, both the DoJ and Attorney General William Barr were named as defendants. The suit required the Court to vacate the new opinion on the Wire Act due to the potential for it to reduce yearly lottery profits in New Hampshire. This DoJ’s opinion could also potentially affect prospects for other future internet-based wagering products, like online poker in New Hampshire.

It didn’t take long for New Jersey to involve itself in the suit either, stating its clear opposition to the DoJ opinion on the act. Obviously, being one of the few states with state-legalized online gambling, it also stood to lose out with the change in opinion. Pennsylvania Attorney General Josh Shapiro also rallied against it.

On June 3, 2019, the original decision on the case was made by U.S. District Court Judge Paul Barbadoro, which stated that the Wire Act only applies to sports betting. With this, the DoJ’s latest opinion on the Wire Act was overturned: a definite loss for the DoJ.

As many foresaw at the time, this only led to the DoJ filing notice of its intention to appeal that decision. And although there were various appeal extension requests granted to the DoJ, it looks as though that department’s efforts were for naught because the appellate court has just upheld the judgment in favor of The Granite State.

The news of New Hampshire’s victory over the DoJ was first announced on Twitter by lawyer Jeff Ifrah who was involved peripherally in the litigation. In that tweet, Ifrah said that the First Circuit Court of Appeals ruled in favor of the plaintiff with regard to the DoJ’s 2018 revised opinion on the Wire Act. Therefore, it outrightly upholds the decision of the lower court, meaning that the Wire Act does only apply to sports events and contests. Ifrah went on to call this decision a big win for New Hampshire.

Ifrah actually operates as a council member for an association called iDEA Growth. This is a collection of operators, payment processors, and so on that are related to the online gambling scene. It didn’t take long for iDEA to release its own statement with regard to the Court of Appeals decision, incorporating commentary from Ifrah alongside. Part of that statement reads as follows:

This landmark decision is a victory for states’ rights; for clear reading of federal statues, and for the gaming industry and its customers…Today’s decision will hopefully put to rest the question of whether federal law prohibits states from licensing internet gaming within their borders and compacting with each other to allow such gaming on an interstate basis.

The Language Under Argument

The Wire Act of the United States was initially introduced so as to prevent the utilization of phone or other wire-based communication as a way of placing bets. It was directed against Mafia-controlled sports betting enterprises. In more recent times, that act has been interpreted to apply to the internet just as much as phone lines. The relevant portion of the Wire Act is:

So the argument related to the “any sporting event or contest” part with some people claiming that this clause was implied in the other portions of the quoted text rather than just the first clause. Others insisted that the qualifying phrase “any sporting event or contest” only limited the section of the text that immediately preceded it and that the remainder applied equally to all forms of wagering. However, the appellate judges decided that the DoJ’s interpretation of the Wire Act as forbidding non-sports bet gaming caused what were described as “unharmonious oddities.”

Summing up its decision, the court wrote:

In conclusion, we find that the plaintiffs’ claims are justiciable and that the Wire Act applies only to interstate wire communications related to sporting events or contests.

Despite the fact that a ruling on the case was expected to take place in November last year, one of the three judges hearing it, Juan R. Torruella, passed away in October. There were then fears that the whole case would require a rehearing. Yet, the other two remaining judges, Sandra Lynch and William Kyatta, proceeded on and ruled in agreement with one another. Therefore, with two votes of three, the outcome still held even in Torruella’s absence at the end.

Where Do Things Go from Here?

While it would be nice to think that the whole ordeal will end here, the DoJ can still appeal the case once more. This time, it has recourse to the Supreme Court of the United States. Of course, there’s no guarantee that this is the route it will choose to take, and there’s nothing that says the Supreme Court will even agree to hear it either.

The fact that Joe Biden has just been inaugurated as the 46th U.S. President doesn’t hold well for the DoJ in this area. He has indicated before that he doesn’t support undue federal interference in gaming, and he also considers the Wire Act to be a definite example of such. Biden has forthrightly spoken of his opposition to unnecessary restrictions on the USA gaming industry, and this is the complete antithesis of what some former Trump Administration officials believed. With this being the case, Biden has the ability to simply direct the DoJ not to pursue the case any further.

What’s more, a lot of the resistance to interstate online gambling can be put down to the work of Sheldon Adelson who passed away on Jan. 11. Due to the fact that he is no longer able to put any backing behind the DoJ and its interpretations of the Wire Act, as well as the fact that Biden is now President, it’s more likely that the case will now be laid to rest altogether. 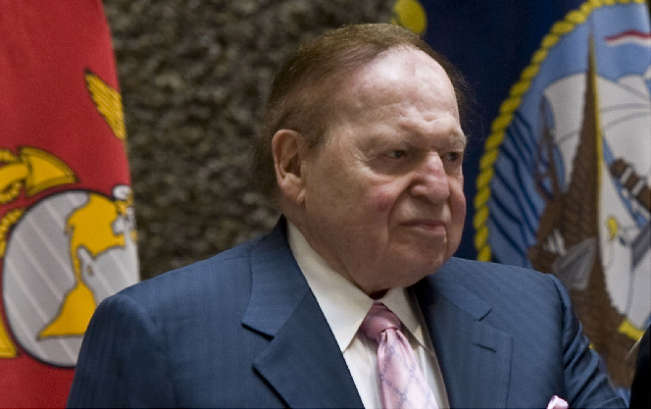 Things are certainly looking brighter for the regulated online gambling scene in the United States. Now that interstate card games have been definitively ruled to not be contrary to the Wire Act, we may see more states agree to compacts to pool their internet poker traffic.

Pennsylvania is the jurisdiction that springs immediately to mind. It has the largest state-licensed online cardroom in the country in the form of PokerStars, but the state is not a party to the gaming agreement between New Jersey, Nevada, and Delaware: a situation that many observers feel was caused by the legal uncertainty around the Wire Act. Should Pennsylvania join this compact, then PokerStars and other operators could combine their operations in New Jersey with those in the Keystone State (as well as Delaware and Nevada) and thereby ensure a more viable online gaming ecosystem going forward. 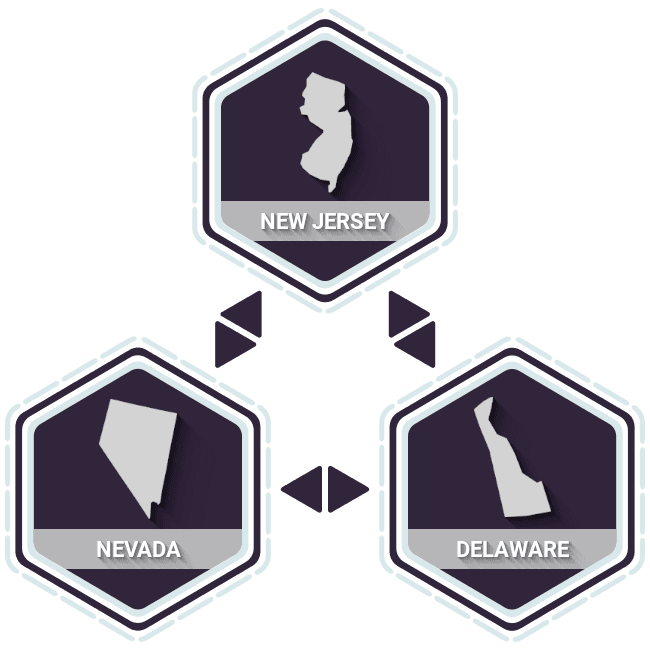 West Virginia and Michigan are two states that have passed legislation allowing interactive poker to be hosted within their borders though no companies have yet debuted in either area. Now that there’s more clarity surrounding the potential for authorized multi-state poker, businesses may feel more comfortable moving forward with their plans. West Virginia in particular, with its population of just 1.8 million, is probably too small for any viable online poker sites to emerge without joining its player volume together with larger states.

Playing Online Poker in the U.S.

For the time being, there is already a selection of exciting online platforms to engage in poker gameplay at. And we can recommend a nice choice of these for you to check out. Whether or not your state regulates online poker firms to do business within its borders, there’s no legal penalty preventing you, as an ordinary player, from signing up and accessing the tables on offshore sites.

To find out about our top recommended poker sites in the U.S., be sure to read through this U.S.A. internet poker guide and learn about them all. Within that guide, you’ll get to learn all about the best poker rooms for U.S. residents and select the one that’s right for you.