BetOnline Rake Increase ANGERS Players: Is It Just an Error?

BetOnline and the rest of the Chico Poker Network (Sportsbetting.ag, TigerGaming) have just been caught with their pants down around their ankles. And no, they were not rehearsing for an exciting new production of The Full Monty.

Rather, these online poker sites had adjusted their rake arrangements, to the detriment of unsuspecting players, without any forewarning or announcement. Eagle-eyed poker forum participants noticed the change, however, and raised an outcry about it. 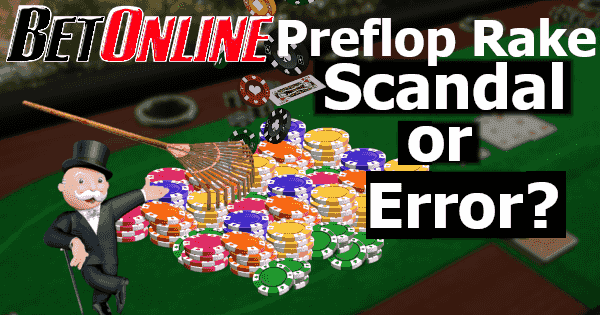 About the Rake Changes

It’s standard in the industry for pots that end preflop to not have any rake taken out of them. Indeed, all other sites in this comparison of online poker rake schedules have a “no flop, do drop” policy: If the hand ends before the flop is seen, the poker room doesn’t collect anything from the pot for itself. This is the way the Chico Poker Network operated too before Jan. 22.

Other users confirmed the experience of the first individual who posted about this phenomenon. It soon became clear that the issue arose whenever there was a 3-bet and the original raiser folded:

According to admittedly rudimentary calculations performed by forum posters, this change results in the poker room raking an extra 1.5 bb to 2.0 bb per 100 hands – an amount that represents a respectable winrate for a solid, multi-tabling grinder.

Needless to say, none of BetOnline’s customers who bothered to make their views known were in favor of this rake increase. 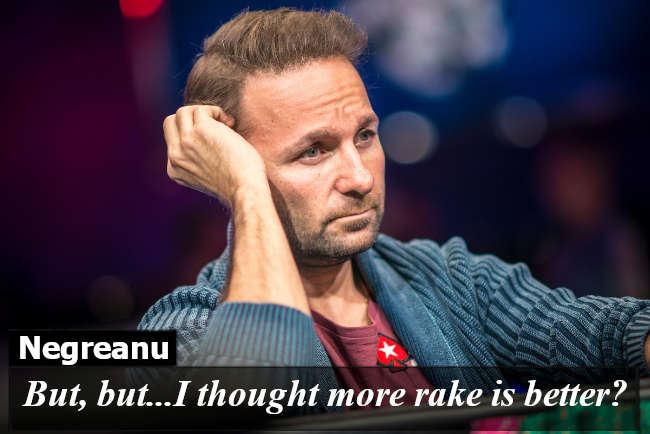 Beyond just being upset at more money being taken away from users, the fact that this new rake structure was implemented without any forewarning to players stuck in the craws of many forumites. Indeed, some went so far as to say that they were done playing at the site:

Forum representative “BetOnline Mike” stated on Thursday, Jan. 28 that the entire situation was the result of a mistake:

We reached out to our contacts at the Chico Poker Network to get the latest word on how they are planning to resolve this embarrassing predicament. They, echoing “BetOnline Mike,” stated that the rake change was “all due to a technical error.” We were assured that on Monday (Feb. 1), a fix will be implemented, and all individuals who had paid this extra preflop rake would be “duly reimbursed.”

Though it has had its fair share of controversies in the past, the team behind BOL has almost always managed to make things right by their players – even if this satisfaction has sometimes been a long time delayed.

In early 2017, the “Blackjackgate” scandal saw a blackjack dealer in BOL’s live casino caught cheating by performing a technique known as second dealing. The evidence was captured on video. BetOnline responded by axing its contract with its Live Dealer provider and switching over to an entirely different platform. Since that time, there have been no further serious allegations of cheating by live dealers at the site.

In late 2018, the Chico Poker Network was under scrutiny again, this time for increasing the house percentage taken from its Bad Beat Jackpot to 15% without alerting anyone to the change. The BBJ fee has since been reduced to a very reasonable 5% though.

The sole outstanding item that raises the ire of players was the discontinuation of the comp points program in 2019. Despite assurances that a new points system was being designed and would soon be announced, there has been no publicly revealed movement on this front for more than a year.

More to This Story Than Meets the Eye?

We were heartened by the information we were given that the entire preflop rake debacle was the result of an honest mistake, which will soon be corrected. However, we couldn’t help digging a little deeper, and we found evidence that the party line coming from the mouths of network representatives isn’t exactly the entire unvarnished truth.

Why, if the rake increase were a simple error, did management update the terms and conditions at BetOnline to exclude 3-bet pots from the general policy of no rake being taken from hands folded preflop?

BetOnline Rake Rules as They Appear on Page Archived Nov. 20, 2020

BetOnline Rake Rules as They Appear on Website at Present

This makes it seem like the adjustment to the rules was a definite policy pursued on purpose by the CPN. Then, facing pressure from their player base, higher-ups opted to reverse course and cover their asses by referencing nonexistent software bugs.

Even if this was the case, however, the main point is that BetOnline is rolling back this rake increase. This just goes to show the power that the internet poker community has when it actually bestirs itself to make its opinions known. We urge everyone with an interest in online poker – whether as an affiliate, promoter, evangelist, or ordinary player – to make his or her voice heard. That is, after all, the only way to get operators to deliver what you want.

Assuming all goes as announced and the preflop rake change is rolled back, we’re still comfortable recommending the site to our readers and playing there ourselves. When you open up a new account and make a deposit, you’ll get a 100% up to $1,000 poker bonus as well as promotions for the casino, sportsbook, and other product divisions. Read a thorough BetOnline review to find out more about these and other promos that await you.

BetOnline has a couple of sister sites that offer almost identical betting platforms. Find out more about them in this factual Sportsbetting.ag review page and honest TigerGaming (non-US) review.

If you would rather head elsewhere for your offshore poker needs, then browse over to the guide to USA online poker, which will give you detailed information about the rooms that accept American customers.