As if 2020 wasn’t a bad enough year for gambling operators, it seems as though things have become even worse for one of the largest: Flutter Entertainment. It was about two years ago that the Kentucky Court of Appeals opted to overturn an $870 million judgement made against the PokerStars online poker brand. However, that decision was re-reversed on Thursday, Dec. 17, meaning that the eye-watering amount (now increased to more than $1.2 billion from 12% annual interest) is once again being left to the brand’s parent company to pay. The difference is that PokerStars is now owned by Flutter Entertainment after it purchased The Stars Group on Wednesday, Oct. 2, 2019 for $6 billion.

Flutter has already stated that it intends to fight the ruling made by the Kentucky Supreme Court after being understandably taken aback by the outcome. The original lawsuit surrounding this ruling dates all the way back to 2010 with case law involved that actually goes back to 1798! Flutter has mentioned that the state’s argument was actually counter to modern established precedent though, and it is this that it aims to fight the ruling with. 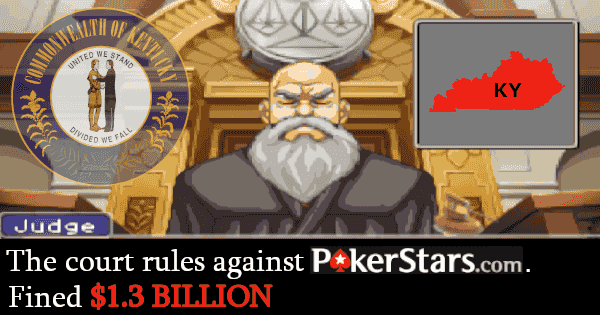 It makes you wonder what exactly the original problem was that made Kentucky seek such a hefty amount from PokerStars in the first place. Well, the litigation was initially filed by the Commonwealth of Kentucky back in 2010, which was four years prior to The Stars Group taking over the PokerStars brand. In that original litigation, the recovery of alleged losses by Kentucky residents who participated in real money poker at PokerStars between 2006 and 2001 was sought.

It was in 2006 that the United States federal government passed the Unlawful Internet Gambling Enforcement Act (UIGEA), which targeted banks and online poker sites providing their services in the United States. PokerStars did not elect to adhere to the government’s ruling though and continued providing its services to the country’s players. Due to this, it became one of the companies that was hit hard by the 2011 crackdown, which has since gone on to become known as Black Friday.

It was on April 15 of 2011 that the Department of Justice took action, seizing the domains of a variety of poker sites that had continued operating within the US. The most notable platforms to suffer at the hands of this move were PokerStars, Ultimate Bet and Full Tilt.

It was four years after this that a decision was rendered in the lawsuit in Kentucky’s favor. Some saw the move by the state as an outright attempt to cash grab, especially thanks to the fact that it utilized antiquated laws from decades ago, also known as the Loss Recovery Act (LRA). So, how did it come to believe that $870 million was owed as recovery funds?

Well, the Kentucky Commonwealth looked at the gross losses of players within the state and proceeded forward with tripling that amount. That did not include the players’ winnings, or any bonuses paid out to them. In this respect, the reparations sought out far exceed the $18 million rake that PokerStars collected from Kentucky players within the same time period by almost 50 times.

In December of 2015, a decision was reached by a judge in trial court, who ruled in favor of Kentucky, imposing a $290 million fine on PokerStars. This was then trebled to the much higher $870 million figure excluding any interest and applicable costs. Of course, The Stars Group opted to fight this ruling as well, with processes going on for several years.

In December 2018, three years after the original ruling against PokerStars was made, a Kentucky appeals court reversed the lower court decision. This saw the $870 million fine overturned, putting PokerStars in the clear. At the time, the executive vice president and chief legal officer of The Stars Group, Marlon Goldstein, said: ”We applaud the decision of the highly respected three-judge panel of the Kentucky Court of Appeals,” before finishing with, “The merits of the case prevailed, and we look forward to putting this matter behind us as we sharpen our focus on executing on our growth strategy going forward.”

The Court of Appeals labeled the original $870 million decision as “absurd” and an “unjust result.” PokerStars had challenged the overall amount of the fine although this wasn’t something that even entered into the decision to overturn it in 2018. Instead, the court’s objection was completely fundamental. The decision was based on the fact that the Kentucky LSA was intended for use by individuals in order to recoup personal losses from illegal gambling activity.

For example, it would be useful if a gambler could prove that they lost money to an illegal underground gambling operation. This would allow them to get money back from such an outcome. However, the Commonwealth did not actually lose any money to PokerStars; nor did it submit a list of specific individuals that it alleged had lost money by participating in poker at the platform. Instead, it simply arrived at an estimate based on the total losses of players within Kentucky.

The story pretty much fell out of public memory after that decision was made. Flutter Entertainment acquired The Stars Group in 2019 and everything seemed to be progressing in a decent way. Until now.

The Supreme Court took its own view of things, contradicting pretty much everything that the Court of Appeals claimed in its reverse decision. Within its ruling, the Kentucky Supreme Court stated several opinions, including:

One of the most bizarre findings in this case, though, is that the Supreme Court also opted to reject the PokerStars argument regarding player winnings. The poker room suggested that those winnings should offset the losses. Yet, it was overruled in this area too with the Supreme Court once again referring to precedent set back in the 19th century. This states that the house, collecting a percentage, is liable for players’ gross losses.

Flutter Vows to Fight On

The decision made by the Supreme Court definitely came as a blow to Flutter Entertainment, especially considering it has only owned The Stars Group/PokerStars for one year. And while it’s usually the case that the Supreme Court’s ruling is the final recourse when it comes to legal battles, Flutter isn’t finished yet.

Upon announcing the verdict of the Supreme Court to its investors on the afternoon of the outcome, Flutter went on to state that it still has a number of legal processes available. While it did concede that it’s likely it will end up paying some portion of the fine, it expects that the overall final amount required will be smaller in the end. However, it remains to be seen how Flutter intends to fight and when this will occur.

Should the verdict of the decision stand, it would be quite the hit for Flutter to take. Not only was the original $870 million fine re-applied, but the court also applied a total of 12% interest annually to that figure also. In this respect, the total would equate to over $1.2 billion should the interest be retroactive to the original date when the trial court made its ruling.

The gambling sector hasn’t really seen a fine as big as this handed out. The biggest to date was seen in the United Kingdom, when Caesars Entertainment was ordered to pay a £13 million ($17.4 million) sanction to the Gambling Commission of the country. This came following a series of systematic responsible gaming failures by the operator at multiple UK casinos.

Of course, in comparison to some of the largest fines where businesses in general are concerned, the $1.2 billion figure is nothing special. Flutter is, fortunately, a large company, and so is likely to be able to absorb such a blow far easier than PokerStars ever could do by itself. The 2019 revenue for Flutter was around $2.9 billion, and this came prior to its acquisition of The Stars Group, which secured around $2.5 billion in the same period.

Playing Poker in the USA

PokerStars is still active in the United States for real money gaming but only within Pennsylvania and New Jersey for the time being. These are the sole locations for which the brand holds an official gambling license.

However, this doesn’t mean that you can’t play poker at various other sites. If you wish to explore your options as a Kentuckian, then check out this in-depth page describing the internet poker scene in Kentucky. We also have a guide towards accessing online poker rooms from within America that you can read through if you hail from one of the other 49 states.